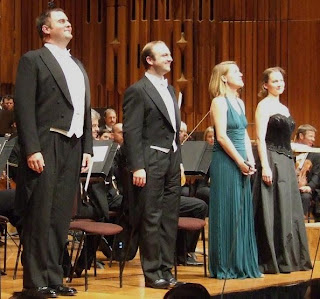 When Britten announced that he was going to write an all-male opera we thought he was barking mad (just as we did when he said he was writing a requiem interspersing Wilfred Owen poems with sections of the liturgy - and that turned out to be his most popular work: it made,as Michael Flanders quipped, Bundles for Britten, just as he also said of Billy Budd, the all-male opera, that it made Joan Cross. One more quip and then I'll be serious: Britten sent Michael Tippett a copy of the libretto of Budd, asking for comments. Tippett replied saying what a good libretto Eric Crozier and E.M.Forster had written. But he suggested that a line in act One might be misconstrued: Claggart at one point sings "Clear the decks of seamen". Britten wrote back saying what a filthy mind Michael had: but he cut the line.

All this apropos two concert performances (both packed, in the Barbican; I heard the second, December 9) of Billy Budd meticulously prepared by the London Symphony Orchestra under its principal guest conductor,Daniel Harding, conducted with great accuracy, enthusiasm and perception.

It is a large cast and the performance was dominated by Gidon Saks in the part of Claggart, master-at-arms and villain of the piece. This character is so depraved and disliked that it has proved from the premiere (which I saw at Covent Garden fifty-six years ago, December 1951) onward the most difficult of roles to make credible. Saks needed no stage to project a frightening villain, masterfully sung. The audience sensed that this was an overwhelming performance by a great artist.

The title role was sympathetically sung by Nathan Gunn. The Peter Pears role of Captain Vere was sung by lan Bostridge. This concert was the opening salvo in a Barbican series devised by and featuring the tenor lan Bostridge but, truth to tell, his performance, though sung with great understanding and consummate musucianship, was the least satisfying vocally. Style there was in plenty, but vocal beauty was sadly lacking. The large cast distinguished iteelf and it would be invidious to mention one without mentioning all; nevertheless Andrew Tortise forces himself into print here because he made such a convincing sneak of Squeak, Claggart's creature and provocateur. Chorus and orchestra completed the round of performance excellence.

What a great opera is Billy Budd: Grimes was a wonderful first opera but Budd is an even greater work, like an arrow directed so firmly at the target, all of a piece musically with its unique concentration of dark colours (below the Plimsoll line ?) woodwind and brass to the fore, dramatic thrust, the conflict as Vere is faced with the opposing forces of duty and morality. That he fails as a human being is of course what makes the drama so telling. The anti-climax
when the mist thwarts the HMS Indomitable from getting to grips with the enemy is gripping for the audience. (It was typically crass that the British Council sent the original Covent Garden production for performance in Paris and wondered why it didn't go down too well, especially the scene when the officers sing the lines: "Don't like the French.Don't like their Frenchified ways.")

With all the stupid 'concept' productions that do their utmost to disregard the composer's intentions, an intelligent concert performance like the present one is something of a blessing and a relief.
Posted by John Amis at 3:04 AM

John Amis
Six weeks in a bank was enough for him to decide to live by and with music. Selling records and writing about them for a high-class gramophone shop, working with London Philharmonic, Symphony and Royal Philharmonic, organising concerts for Myra Hess at the National Gallery and for Michael Tippett whose secretary-dogsbody and friend he was, concert manager for Beecham, music critic for The Scotsman, organiser of the Summer School of Music with William Glock at Bryanston and Dartington for 34 years, broadcaster on radio and TV for 40, during which time he interviewed some 500 of the most famous and interesting musicians, Hindemith to Bernstein, Cage to Swann, Stravinsky to Stockhausen. He has narrated parts in Façade, Peter and the Wolf, Enoch Arden and Babar the Elephant. For his 70th birthday made a CD with friends Leslie Howard, Steve Race, Malcolm Arnold, Donald Swann, Jeffrey Tate and Ian Wallace. His books include an autobiography Amiscellany, an anthology Words about Music and My Life in Music 1945 – 2000, A Photographer at the Aldeburgh Festival (Nigel Luckhurst) and Musicians on Camera (Lelia Goehr).